Has Brexit Brought The House Down Or Built A New Extension? The Next 12 Months Revealed

Has Brexit Brought The House Down Or Built A New Extension? The Next 12 Months Revealed

Has Brexit Brought The House Down Or Built A New Extension?

Follow the Steel Wolf guide to what Brexit will mean in the construction industry which has impact on all of our lives for the next 12 months! Our FREE and easy to understand 2016/17 guide to the next 12 months is backed up by industry sources and provides a glimpse into what we can expect in the next 12 months. Download the FREE 20 page guide below.

This report analyses the latest data on construction activity for the first half of 2016 and provides an assessment of the industry’s prospects for the second half of 2016, for 2017 and beyond in light of the vote to leave the EU.

falls in project starts & output UK construction faces a period of intense political and economic uncertainty following the Brexit vote.
As we saw in the aftermath of the 2008 financial crisis, such ‘market shocks’, disrupt, suspend and reshape established
market relationships. We expect industry workload pipelines and order books to be disrupted over the coming months as investors and clients re-appraise the rational of their existing plans against the new political and economic environment.

The most immediate challenge is that,whilst the UK has voted out of the EU, it may be several years before it becomes clear what the UK has voted into. Against this uncertain background, UK economic growth is likely to slow during the second half of 2016, with capital expenditure particularly weak.
During the first six months of this year the construction industry has seen the flow of projects starting on site disrupted by a combination of poor weather and investor nerves ahead of the EU referendum. Following the Brexit vote, with political uncertainties persisting, we anticipate a
continued hiatus in private project starts on site during the remainder of 2016 and into next year. 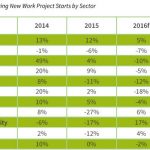